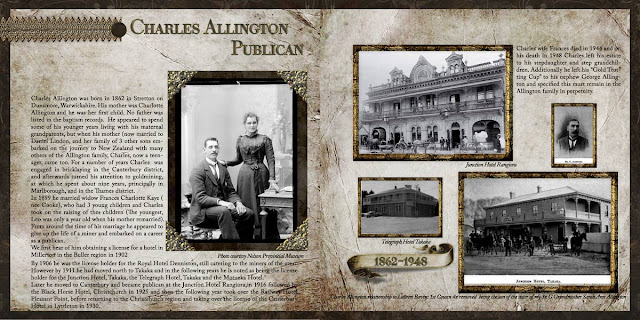 Charles Allington was born in 1862 in Stretton on Dunsmore, Warwickshire. His mother was Charlotte Allington and he was her first child. No father was listed in the baptism records.  He appeared to spend some of his younger years living with his maternal grandparents, but when his mother (now married to Daniel Lindon, and her family of 3 other sons embarked on the journey to New Zealand with many others of the Allington family, Charles, now a teenager, came too. For a number of years Charles  was engaged in bricklaying in the Canterbury district, and afterwards turned his attention to goldmining, at which he spent about nine years, principally in Marlborough, and in the Thames district.
In 1899 he married widow Frances Charlotte Kaye ( nee Cooke), who had 3 young children and Charles took on the raising of these children (The youngest, Leo was only a year old when his mother remarried).
From around the time of his marriage he appeared to give up the life of a miner and embarked on a career as a publican.
We first hear of him obtaining a license for a hotel in Millerton in the Buller region in 1902.
By 1906 he was the license holder for the Royal Hotel Denniston, still catering to the miners of the area.
However by 1911 he had moved north to Takaka and in the following years he is noted as being the license holder for the Junction Hotel, Takaka, the Telegraph Hotel, Takaka and the Motueka Hotel.
Later he moved to Canterbury and became publican at the Junction Hotel Rangiora,in 1916 followed by the Black Horse Hotel, Christchurch in 1925 and then the following year took over the Railway Hotel Pleasant Point, before returning to the Christchurch region and taking over the license of the Canterbury Hotel in Lyttleton in 1930.
Charles wife Frances died in 1944 and on his death in 1948 Charles left his estate to his stepdaughter and step grandchildren. Additionally he left his “Gold Trotting Cup” to his nephew George Allington and specified this must remain in the Allington family in perpetuity.

Charles Allington relationship to me: 1st Cousin 4x removed  being the son of the sister of my 3x G Grandmother Sarah Ann Allington
Posted by Unknown at 10:44 PM

Email ThisBlogThis!Share to TwitterShare to FacebookShare to Pinterest
Labels: Allington