The Remarkable Story of the Boams and the Wilsons of Winster and how a girl became her own Sisters Mother! 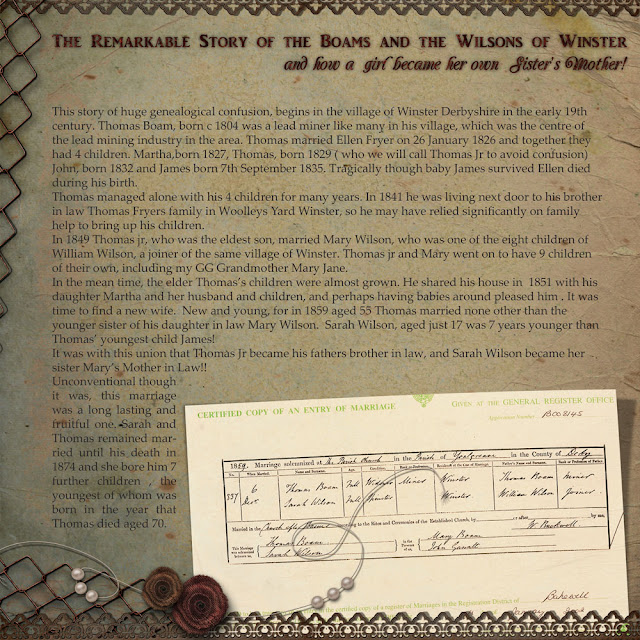 Firstly I must thank Dawn Scotting for her research and for purchasing the marriage certificate in this layout. Without her I never would have worked out this part of my family tree!!

Here is the journalling from this layout :
This story of huge genealogical confusion, begins in the village of Winster Derbyshire in the early 19th century. Thomas Boam, born c 1804 was a lead miner like many in his village, which was the centre of the lead mining industry in the area. Thomas married Ellen Fryer on 26 January 1826 and together they had 4 children. Martha,born 1827, Thomas, born 1829 ( who we will call Thomas Jr to avoid confusion) John, born 1832 and James born 7th September 1835. Tragically though baby James survived Ellen died during his birth.
Thomas managed alone with his 4 children for many years. In 1841 he was living next door to his brother in law Thomas Fryers family in Woolleys Yard Winster, so he may have relied significantly on family help to bring up his children.
In 1849 Thomas jr, who was the eldest son, married Mary Wilson, who was one of the eight children of William Wilson, a joiner of the same village of Winster. Thomas jr and Mary went on to have 9 children of their own, including my GG Grandmother Mary Jane.
In the mean time, the elder Thomas’s children were almost grown. He shared his house in  1851 with his daughter Martha and her husband and children, and perhaps having babies around pleased him . It was time to find a new wife.  New and young, for in 1859 aged 55 Thomas married none other than the younger sister of his daughter in law Mary Wilson.  Sarah Wilson, aged just 17 was 7 years younger than Thomas’ youngest child James!
It was with this union that Thomas Jr became his fathers brother in law, and Sarah Wilson became her sister Mary’s Mother in Law!!

Unconventional though it was, this marriage was a long lasting and fruitful one. Sarah and Thomas remained married until his death in 1874 and she bore him 7 further children , the youngest of whom was born in the year that Thomas died aged 70.