I originally had my DNA tested at Ancestry.com to try and solve a few of my family tree brick walls and mysteries. Namely who was my 2x G Grandmother Mary Ann Gleeson, and also was my 2x Great Grandfather William McClellan actually William McClelland Secombe. Sadly to date neither of these brick walls have been smashed but I will say that my results, whilst confirming some lines of my family tree, has created a lot more mysteries than it has solved!!

I also tested my mother, and since then 1 distant paternal cousin has tested and  3 maternal cousins have also tested and one more is waiting to be processed.
My mothers results have proven the most help, but also the most mysteries.
The biggest mysteries resulted from the 9 NADs or New Ancestor Discoveries that popped up on her DNA profile . These are suggestions from Ancestry. They suggest because my mother has DNA connections to multple others who are all descended from that person, that perhaps she is also descended from him/her.
In most of these instances its almost impossible to see how there could be a relationship. Many of these NADs are families of long time US residents, with little or no history traced back to the UK let alone New Zealand.

However one NAD popped up recently that had an interesting connection.

In fact it is a group of NADs -

A quick bit of research indicates that Edwin Ford is the husband of Emily Sandall, and Ann Hill is the wife of Thomas Sandall who is Emily's father. Its clear here the connection is actually with the Sandall family and not the spouses.
The other clue is that there is a common birth location between the trees of Thomas Sandall and my maternal tree.

Henry's marriage certificate states his father is one Richard Dickson.

I have looked extensively for this Richard Dickson but have found no trace of him or any other Dicksons in Kidlington.

What I did discover today though was this.

Below is a clip from the 1841 Census for Kidlington  and there in Church End Martha Abbott and her son Henry is living right next to William and Mary Sandall and their children. Thomas, who was 22 at this time had left home and was living in Surrey at the time.

Martha goes on to have one more illegitimate child - Mary, in 1843, in Woodstock Oxfordshire, before marrying John Matthews in 1844, but by 1851 the Matthews, and all their children, including Henry and Mary are living back in Kidlington right next door to Thomas Sandalls parents again.

I doubt we will ever get paper proof that Thomas Sandall was Henry Abbotts father, and therefor my mothers 3x G Grandfather and my 4x G Grandfather, however the DNA connections are telling a fairly convincing tale

My mothers DNA profile is liked to 8 people descended from Thomas Sandall - 2 of them share 100 cM with her which is actually more than what you would expect from a 1/2 3rd cousin relationship. 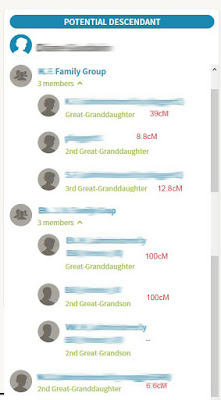 As you can see there is a vast difference in the amounts of DNA.  In addition to these  , there are 2 more who dont appear on Emily's Circle but appear on her father Thomas's circle
This is because they descend not from Thomas' daughter Emily but one  from his son Joseph and one from son Thomas.
This combination of various descdendants of Thomas Sandall do appear indeed to confirm that a young Martha and Thomas Sandall - both born 1818 had a liason in their late teens which resulted in the birth of Henry Abbott.

I found Thomas's life described on Family Search
Thomas Sandall Sr. was born July 9, 1818 in Kidlington, Oxfordshire, England. He married Ann Hill the 27th of September 1842, at the St. Andrew's Church in the Parish of Ham, in the county of Surrey, He was a gardener by occupation and worked very hard to care for his wife and family. Two children were born to Thomas and Ann, they were named Thomas Jr. and Emily. When Thomas Jr. was four years old and Emily was two years old, Thomas Sr. was called by the English Government to go to South Africa. His mission was to teach the colonists how to care for their gardens and how to farm. Arriving in South Africa, they settled in the Town of Uitenhage. There he continued the work he loved best, gardening. The vegetables not needed by the family were sold to the natives. The climate was warm and the soil was rich so the two crops of vegetables would be raised in one year. They found wild grapes, the vines up and over trees fifty and a hundred feet high. There were wild figs, myrtle, apples and wild plums. They lived well by hard work. They had to be on the lookout at all times for the Coffers, these were what the natives were called. Some were friendly and some were savage. Thomas Sr. had to set traps for the monkeys because they destroyed their vegetables, especially the pumpkins. The Thomas Sandall family lived in South Africa about twelve years and while there five more children were born, they were Joseph, William, Annie ,Lucy and Hyrum. In 1858 the Sandalls and their friends were visited by two Elders from the Church of Je-sus Christ of Latter-day Saints, by the names of John Stock and John Wesley. The families were converted and were baptized into the Church. They had a strong desire to come to Zion. On March 22, 1860 in a company with about 70 of their friends, they left South Africa. The friends included: the Wiggills, Talbots, Greens, Bodilys, and Dawsons. The Sandalls got a chance to come to the United States with Robert Bodily and family. Thomas sold all of his belongings and boarded with his family, the ship "Alacrity" sailing from Port Elizabeth around to Cape Town, then over to the Isle of Helena. They were months on the water before they landed in Boston Harbor. While in Boston Harbor, their children took sick with the measles and their baby Hyrum died on the 9th of July 1860 at the tender age of eleven months. They left Boston and came west to Florence, Nebraska and remained there a short time. They started for Utah, with four hundred other saints, in the company of Captain William Budge. Their trip across the plains with ox team and covered wagon was the same as other pioneers. They had many hardships to endure with sickness, experiences with Indi-ans, and had very little food. Their daughter Lucy took sick and died at the age of 3 years old. They couldn't stop long enough to dig a grave deep enough to hardly cover with dirt, and they knew the wolves would have her out in a few hours. She was buried in Mr. Bodily's bass violin case for a coffin. Her parents were heartbroken at the loss of their daughter and under such horrible circumstances. This made two children buried since leaving South Africa. They were grateful to Brother Bodily for the violin case, otherwise she would have been wrapped in a blanket, or something of that nature. They arrived in Salt Lake in 1861 and settled in what was then called Kays Creek in Davis County, Utah. It was while living there that their oldest daughter, Emily, met Edwin Ford. She married him on July 12,1862 in plural marriage and went immediately to the town of Washington in Washington County, Utah. Thomas Sr. brought a large amount of ground in the Central part of the town and continued his occupation as a farmer once again. Two more children were born while they lived there, Jim was born and died while a baby. About this time the site of Kays Creek was divided. The north side of Kay’s Creek was called Layton and the south side, Kaysville. It was on the north side where Thomas Sandall had made his home. Baby Jim was buried in the Kaysville, Layton Cemetery, but all traces of his grave have been lost. John Sandall was the next child and was the baby of the family as Ann was getting into middle age at this time. The children grew up helping their parents where they could and getting married when they were old enough. They had childhood and games and dances such as all other pioneer children had along with schooling.

And below, here is a photo which is apparently Thomas Sandall, Mormon Pioneer  my 4x G Grandfather! 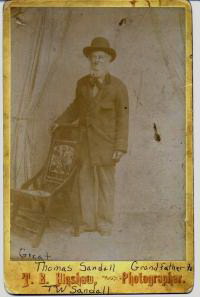 Posted by Laurenbavin at 8:04 PM